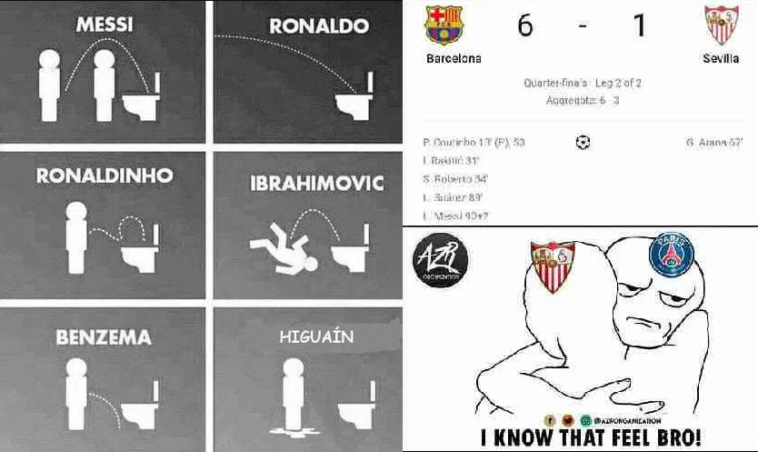 Memes have become an important part of our lives. In Football, as opposing players try to outwit each other on the pitch or court, fans are not left behind thanks to the internet and memes. Memes are a general way to make your favourite team or players seem better by mocking the rivals.

Without further ado here are some of the most hilarious Football memes in 2022.

They have the best manager, some of the best players around and a rich owner. But they never fill their stadium. A huge fan base is what Arab money could never buy.

This is every Football fan.

This sums up Thierry Henry career as a manager.

How were dealing with non football fans in 2019.

New Ac Milan striker Piątek, made the fans orgasm after a brace on his debut. Something Milan fans failed to experience when they had Hinguain.

New Chelsea striker has been a meme for a while now. Thus sums up his role as a striker.

The story of Manchester united forwards failing to find the net a meter from the goal posts summed up in one image.

Barcelona recently made a surprise signing of Kevin prince Boateng. The internet couldn’t hold back

This one never gets old. For yet another season Arsenal won’t lift the premier league.

Not sure if this qualifies to be a meme, but the image communicates certain of how times have changed.

Jesse Lingard celebration after scoring against Arsenal at the Emirates gave birth to another. The Emirates being his dancefloor.

We all have this friend, don’t mention him or her.

The #10YearChallenge wasn’t too pleasing for Spurs fans. Here is a meme comparing their trophy cabinet in 2009 & 2019. Well, it’s still empty.

After securing a first leg victory in Copa del Rey quarter finals, Sevilla went on to lose 6-1 to Barca. They felt the same pain PSG endured a couple of years ago.