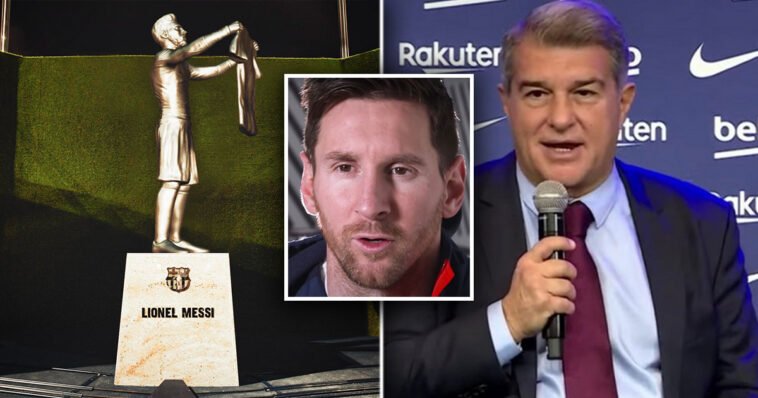 Joan Laporta has announced that Barcelona will build a statue of Lionel Messi amid reports they will try to re-sign him next summer.

Messi left Barca after a near-20-year-long affiliation with the club in 2021 as they were unable to extend his contract due to crippling debts. The Argentine didn’t even get a farewell appearance after his departure was announced, but Laporta has now confirmed plans to immortalise him outside the club’s famous stadium.

Laporta said at Barca’s General Assembly over the weekend: “We will build a statue of Leo Messi outside the Camp Nou. The decision has been made.”

THE BIGGER PICTURE: Rumours have been circulating that Messi could return to Camp Nou next summer, at which point his current contract at Paris Saint-Germain is due to expire. The 35-year-old has an option to extend his stay at Parc des Princes, however, and won’t make a final decision on his future until the end of the season.

The seven-time Ballon d’Or winner missed PSG’s latest Ligue 1 outing against Reims due to injury but is in line to return against Benfica in the Champions League on Tuesday night.