During Saturday’s preseason friendly between Paris Saint-Germain and Urawa Reds, Lionel Messi even made the announcer giggle.

With 30 minutes remaining to play, the great Argentine forward entered the game after sitting on the bench and stunned the Saitama Stadium audience with a few of his signature magic moments.

By the time Messi entered the game, PSG had already gotten two goals in the first half from Kylian Mbappe and Pablo Sarabia.

Messi came close to scoring, but the game’s third and final goal was scored by youthful attacker Arnaud Kalimuendo for PSG.

seven-time winner of the Ballon d’Or Messi, who turned 35 last month, was animated the entire duration of his cameo.

He produced a few chances for goals, forcing Ayumi Niekawa to make a save, and at least once worked very hard to win the ball back for his team.

Messi also gave one Urawa Reds player who tried to take down the guy many football fans consider to be the GOAT no mercy.

Messi left the unfortunate man on the deck pondering his life decisions with a few lightning-fast touches and a few feints.

Messi continues to humiliate players who are far younger than him even at the age of 35. You enjoy seeing it.

You can see all of Messi’s game-related highlights here: 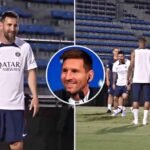