Lionel Messi reportedly made nine demands that had to be met before signing a contract extension with Barcelona.

The 35-year-old left Barcelona emotionally in 2021 due to his financial woes, shocking the footballing world.

He was incredibly close to leaving in 2020 after both sides failed to agree on contract terms. That failure meant Messi didn’t sign an extension but left for Paris Saint-Germain a year later.

Messi classified all nine demands as important, according to El Mundo, and then-President Josep Bartomeu rejected two of them.

So what exactly did Messi ask for?

Messi and Luis Suarez have been friends since Suarez joined Barcelona in 2014 and the former wanted to take care of his colleague. He wanted a private box at Camp Nou that he and Suarez’s family could use at any time.

The first term Barcelona refused to meet. Financial difficulties meant they couldn’t pay Messi what he felt he deserved. Only PSG superstar Kylian Mbappe has been paid for an extension in this region.

Messi was happy to sign but wanted flexibility in his contract. He wanted his release clause to be reduced from €700m to just €10,000. That means he could have moved whenever and wherever he wanted. Barcelona refused to agree to the second term.

Every Barcelona player has taken a pay cut during the coronavirus pandemic in 2020. Frenkie de Jong knows all about it. Messi was among them and wanted his full wages plus three percent interest back.

The Argentina international wanted a way to fly back to his home country to join him and his family over the holidays.

Messi wanted his net salary to remain the same should the Spanish government increase taxes.

The seven-time Ballon d’Or winner had a personal assistant, Pepe Costa, who was paid by Barcelona during his final years in Catalonia. Costa’s future has been in doubt during the pandemic but Messi insisted he keeps his job.

The last demand was an order for his brother Rodrigo Messi. Why did Barcelona agree to this? Rodrigo represented child prodigy Ansu Fati at the time and knew negotiations with him were on the horizon. It effectively made two deals. 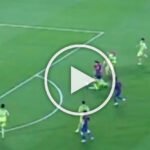