Paris Saint-Germain pair Lionel Messi and Neymar have literally struck an impermeable bond which their respective spouses will gaze in jealousy.

The South American duo have begun the season on a flier, with Leo Messi notching two goals while Neymar has bagged three goals in as many games played in the French top-flight.

Their virtuoso displays have catapulted PSG to a 100 per cent start to the campaign as confidence of winning the elusive Champions League continues to grow with the current firepower of the team.

But what seems to be a threat to reaching their objectives for the campaign is the power struggle between Neymar and Frenchman Kylian Mbappe which reached full circle in their last league game against Montpellier.

The feud has continued throughout the course of the week as coach Christophe Galiter and his technical team were forced to step in to resolve the issue before it gains roots.

Amid Neymar’s reported feud with Mbappe, the Brazilian playmaker has deepened his relationship with Messi, whom he played with at Barcelona.

In a video posted on Twitter, seen by Sports Brief, the duo looked literally inseparable as Neymar and Messi held hands as coach Galtier divided his team into groups of two and three.

Predictably, Neymar chose Messi as his partner as the pair gleefully went through the training drill with excitement.

Coach Galtier will hope this will serve as a good omen to ward off the unnecessary tension which has festered throughout this week ahead of their next league assignment against Lille.

Leo Messi strikes deal with Neymar to reduce powers of Mbappe at PSG.

Earlier, Sports Brief reported that the only piece of football news emanating from France’s top-flight league this week is the power battle at Paris Saint-Germain.

Football coaches at the club have always had to deal with ego issues of the numerous superstars at the club’s disposal and recently appointed manager, Christophe Galtier, is no different.

Galtier is faced with the daunting prospect of reigning in and restoring order in the dressing room if recent reports are anything to go by. 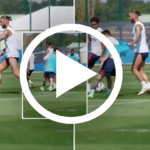