Paris Saint-Germain superstar Lionel Messi left his compatriot Sergio Aguero in a state of awe following his showstopping performance over the weekend.

Messi was in beast mode when PSG secured a three-nil win against lowly-placed Ajaccio last Saturday at the Stade Francois Coty.

The Argentina captain scored once and provided two assists as the Parisians strengthened their grip at the top of the French top-flight league table.

His performance drew praise from football followers, who trooped to the micro-blogging App, Twitter, to sing praises for the 35-year-old playmaker.

Messi’s praise did not end with only the fanbase as former Argentina teammate Sergio Aguero applauded the seven-time Ballon d’Or winner on the back of his sublime goal.

In a video posted on Twitter, seen by Sports Brief, Aguero, who was monitoring the tie between PSG and Ajaccio clapped for Messi after his sublime goal. 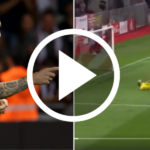