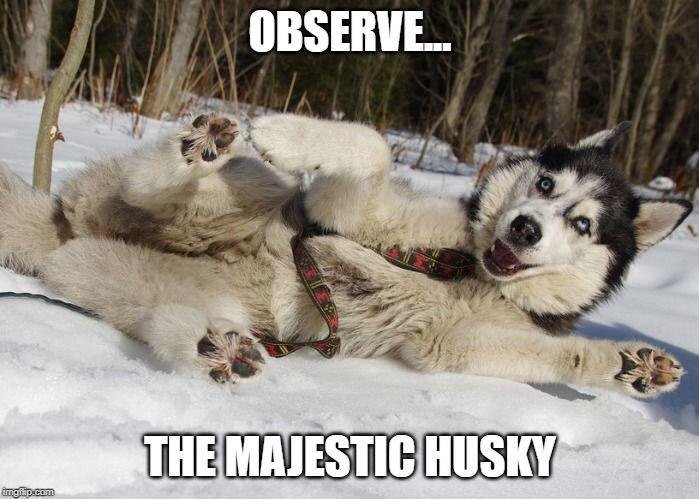 Today I’m going to talk about the fact that Huskies are the most noble breed. In addition, I’m sharing some pictures that prove what I said. I am starting by pointing out some of the reasons why Huskies are so noble.

Our coexistence with this breed began with the early tribes of Siberia. Since then, we’ve been helping each-other and creating new memories. There are elements that are inherited from generation to generation because their importance has really been to be remembered.

As we can mention the serum run which is the most well known action of all. On the other hand, the kindness that the public has towards this dog is also distinguished in the realization of the cartoon films starring Husky. Creations that are so loved by all ages. In other words, these canines bring happiness to any family that owns a husky.

Since the first moment you cross on the street with a Husky you realize how elegant and noble they are. With that said let’s look at some other reasons which tell more about their nobility.

Huskies Are The Most Noble Breed

#1 The way they walk, their physique, their behavior… practically everything about Huskies screams Royalty. #2 They are able to do some extreme posing I would say, like in this picture. #3 They know where and how to stay calm. This fellow is killing his first appearance on TV. #4 And they have a good fashion sense…check at this big boys crown. Nice huh! #5 Husky are independent and a strong breed. #6 Did you know that every Husky ever has scored around 22000 on their SATs. That is quite something special. #7 Tell a Husky picture that looks horrible. You can’t cause there is not a single picture of that kind. They look gorgeous on every angel. #8 Huskies are not like some dogs that all they want is attention a care all day long. They don’t mind to stay just in the corner of the room. #9 Ah and they are great sleepers too… #10 And last but not least…they have invented their own way of drinking water. Cool!