#1- Wolves Are Better Copycats Than Dogs

In a study published in the journal PLOS ONE, scientists found that wolves observe and learn from each other much better than dogs do. The scientists studied 14 wolves and 15 mongrel dogs, each approximately six months old. During the test, each animal watched a trained dog open a wooden box with its mouth or paw to get a food reward. Afterward, all the wolves, but only four of the dogs, were able to open the box. The wolves were also more likely to use the method they originally observed.

The scientists repeated the experiment nine months later to see if the animals’ age had been a factor. But it wasn’t. Next, the researchers tested whether wolves are better problem solvers than dogs. Each animal tried to open the box without seeing it done first by a trained dog. Most of the wolves couldn’t do it.The researchers believe that wolves are more dependent on each other, so they copy each other more easily than dogs. The scientists suspect that it’s this behavior in wolves that formed the basis for the original social understanding between dogs and humans.

#2- Asian Elephants Comfort Others In Distress

Consolation is rarely seen in animals, possibly because it may require empathy. But a study published in the journal PeerJ shows that Asian elephants will now join the select group of animals scientifically shown to display this behavior. Until now, the group has only included great apes, ravens and certain other corvids, and canines.

A group of 26 captive Asian elephants in Thailand was observed for over a year. When an elephant became stressed by something like a nearby dog or snake, its ears and tail would stand out and it might even emit a roar. When this happened, the researchers observed that other elephants would rush to the distressed one to offer physical and vocal support.

One whiff of the cologne or perfume of someone we love may trigger an immediate emotional reaction in us. For dogs, with their heightened sense of smell, the reaction is even stronger. As published in the journal Behavioral Processes, researchers set out to see how dogs would respond to the scents of absent humans and dogs, both familiar and unfamiliar.

Twelve dogs of various breeds were each presented with five different scents while undergoing a magnetic resonance imaging scan of the brain. The scents were taken from the test dog itself, a dog and a human that lived in the same house as the test dog, an unfamiliar dog, and an unfamiliar human. None of the scent donors were present during the test.

All five scents caused a similar response in the areas of the brain that detect smells. But in the area of the brain associated with emotion, the dogs responded most positively to familiar humans—even more so than to familiar dogs. However, the reward response occurred only with familiar humans (i.e. the people the dogs loved). The researchers weren’t sure if that response was based on food, play, or other factors. They concluded that dogs remember us even when we’re not there. 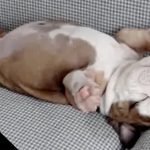