Sadly the number of veteran suicides in United States is raising every day and has become alarming. To raise awareness and prevent suicide an organization launched a campaign. The main purpose of these campaign was to combat post-traumatic stress disorder or any other mental disease that has affected the brain of the men and women that serve in the army.

The challenge on social media to raise awareness was accompanied with the hashtag #22pushup challenge on Instagram. And that is what this men in the photo was doing when he’s dog came in and decided to join the challenge along. 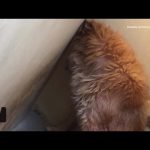