The story is about a puppy found in a plastic bag. It happened in Romania this past summer. When the bag was opened there she was, a dog with a broken leg and maggots that kept eating her flash.

It was horrible, the poor thing was starving, dehydrated and also had a severe head injury.

Her rescuers think that the unfortunate pup had been beaten up severely as an attempt to end her life. First think her rescuers did when they found her was sending the pup immediately in emergency medical care.

The vets removed maggots from her body first and checked the swelling on her brain.

With the passing of the time she was sent to the United Kingdom and even got adopted by a sweet loving family.

During all this period of time she has recovered well. Recently she got a leg surgery that went quite well.

Now she is a healthy dog, completely recovered that loves her owners to death. And it is worth mentioning that she will be running pretty soon now that her leg is fixed.

And to think that this same dog went through hell and head to deal with long recovery to health. Deserves a big up. We can not be happier to see that the pooch is doing well and more importantly is enjoying her life to the fullest. 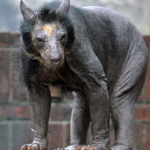