Thanks to initiative of some very special people 45000 abandoned animals were rescued into new homes. I all began with the hashtag #ClearTheShelters. And the response was amazing, more than 14 pets were adopted in a minute which means in just three days were adopted around 45000 shelter animals.
At the beginning the event was scheduled to take place for only one day but since the responses were so positive that people kept coming even after the deadline ended.

This event is held annually, and with each passing years the result are going up, which means a bright future for the shelter animals. 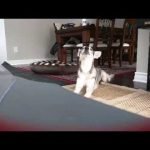