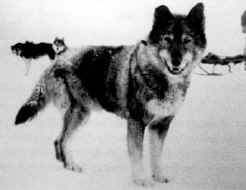 Siberian huskies are famous not only because they are beautiful and friendly but even for their contribution for humans. They are known also for being sled dogs and having very high energy. This is the story of Togo, one of the most famous Siberian huskies.

Togo was a Siberian husky and he was name after a Japanese Admiral called who fought in the war between Russia and Japan (1904-1905), Togo Heihachiro also fought in other conflicts. When Togo was a puppy,  he did not appear to have potential as a sled dog. He grew to about 48 pounds (22 kg) in adulthood, which was small comparing to the other sled dogs, and had a black, brown, and gray coat that made him appear perpetually dirty.

Togo had been sick as a young puppy, he ran a bit small and he had developed a painful disorder which caused his throat to swell and had required intensive nursing from Constance Seppala ( the wife of his owner Leonhard Seppala), who applied hot rags to his throat to ease his pain, however this disorder didn’t stop Togo to be a troublesome and mischievous pup.

Because Togo was a a troublesome and mischievous puppy, Seppala decided he’d had enough of the puppy’s mischief, and gave him away at the age of 6 month to a woman who was looking for a house pet. After a few weeks as a house pet, Togo jumped through the glass of a closed window and ran several miles back to his original master’s kennel. This devotion to the team impressed Seppala, so he did not try to give him away again.

Togo continued to cause trouble by breaking out of the kennel when Seppala took the team out on runs. He would attack the lead dogs of oncoming teams, “as if … to clear the way for his master”. One day, he attacked a much stockier malamute leader and was mauled and severely injured. When he recovered, he stopped attacking other teams’ lead dogs. This would eventually prove a valuable early experience, as it was difficult to teach a lead dog to keep a wide berth of oncoming team.

When Togo was only about eight months old, he finally got the chance to show his quality as a sled dog and a potential lead dog. Sepp had to rush out with a team to a mining camp outside of Nome. A prospector had hired Sepp to take him up to Dime Creek, where there was word of a new gold strike. It was 160 miles away. Sepp had tied Togo up, leaving instructions that he be kept secure for two days after his departure, because he didn’t want Togo chasing after the team and then harassing the dogs in the rush they were in. Togo hated being tied up, and the same night that Sepp left,

Togo broke free from his tether and jumped the seven-foot-high fence of the kennel, but got one of his hind legs caught in the wire mesh at the top of the fence. Squealing and yelping, he caught the attention of a kennel assistant, who came out and cut the mesh to free him. Togo dropped to the ground, rolled over, and immediately set off after Sepp and the team, Togo followed Sepp’s trail and return, this amazed Sepp and he realized that Togo was born to be a leader for the team.

Togo began training and, after a few years, filled the vacated lead dog position. He became one of Seppala’s most treasured dogs, a close and mutually beneficial relationship that would continue to the end of Togo’s life. At the time of the historic Serum Run, he was 12 years old and had been a lead dog for 7 years.

In January 1925 the doctors of Nome realized that a potentially deadly diphtheria epidemic was poised to sweep through Nome’s young people. The only serum that could stop the outbreak was in Seattle, Washington, 2,800 miles (4,480 km) away. After considering all of the alternatives, officials decided to move the medicine via multiple dog sled teams. The first batch of 300,240 units of serum was delivered by train from Anchorage to Nenana, Alaska, where it was picked up by the first of twenty mushers and more than 100 dogs who relayed the serum a total of 674 miles (1,085 km) to Nome.

Togo and Seppala traveled 170 miles (274 km) from Nome in three days, and picked up the serum in Shaktoolik on January 31. The temperature was estimated at −30 °F (−34 °C), and the gale force winds causing a wind chill of −85 °F (−65 °C). The return trip crossed the exposed open ice of the Norton Sound. The night and a ground blizzard prevented Seppala from being able to see the path but Togo navigated to the roadhouse at Isaac’s Point on the shore by 8 pm preventing certain death to his team. After traveling 84 miles (134 km) in one day, the team slept for six hours before continuing at 2 PM.

Before the night the temperature dropped to −40 °F (−40 °C), and the wind increased to 65 mi/h (105 km/h). The team which was leaded by Togo ran across the ice, which was breaking up, while following the shoreline. They returned to shore to cross Little McKinley Mountain, climbing 5,000 feet (1,500 m). After descending to the next roadhouse in Golovin, Seppala passed the serum to Charlie Olsen, who in turn would pass it to Gunnar Kaasen and Balto.

After the successful  1925 serum run to Nome, the hero dog Balto became the most famous dog of the run, and Togo was consider to be the back up dog. In December 5, 1929 Togo died at the age of 16, at the home of Elizabeth Ricker, a friend of Leonhard Seppala and fellow dog musher and breeder, Seppala left Togo, with great sadness.  The headline in The New York Sun Times the next day was “Dog Hero Rides to His Death” (Salisbury & Salisbury, 2003), and he was eulogized in many other papers. After his death, Leonhard Seppala had him custom mounted. Today the mounted skin is on display in a glass case at the Iditarod Trail Sled Dog Race Headquarters museum in Wasilla, Alaska. The Peabody Museum of Natural History at Yale University has his skeleton in their collection.