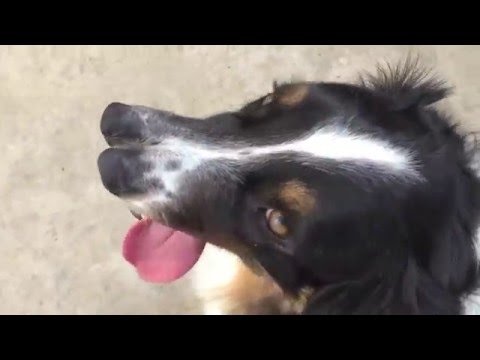 We all should know that our differences make us unique. I mean think about a world where everyone and everything would look alike. In my opinion that would be one boring world to live into. So what I want to say is that people are different, animals are different, but that doesn’t mean that the once who are different are ugly or undesirable. The reason I am saying all this is because of an Australian Shepherd who almost got put down just because he is different. What makes him different? Well he has two noses, and apparently some people thought that this precious creature did not deserve to live anymore. Hell that is pretty messed up y’all.

Good news is that a hero stepped in, and decided to adopt the Australian Shepherd. The guy who adopted the dog is Ted Ray, and named him Toby. From the video below you will understand that not only Toby is no different just because of his physical abnormality, but he is a really energetic and happy being. I just understand people these days. Why do we all have to be so small-minded and treat those who are different with so little respect?

Just because a dog has two noses does not mean that he does not deserve to live anymore. He is just a little different, but that’s it. The Vet checked Toby and he is in perfect health. Fortunately people like Ted make this world a better place because they accept those who are different. People like Ted are able to understand that the appearance is not everything, but what really matters is the heart, the soul, and the attitude of one. Thank you Ted for saving Toby! Enjoy the video, and do not forget to share.