The name of this little tiny puppy is Nicholas. Unfortunately little baby Nicholas had a really bad experience just a few weeks after he was born. His mother already ate his siblings, and she was trying to eat him too, until someone rescued him. The girl who made the story public took the little tiny two weeks old puppy, and decided to take care of him. The strange thing is that once she decided to take care of the poor injured puppy, her cats adopted him, and they started taking care of him.

When Nicolas was only two weeks old, she had to feed him every three hours, and change his bandage every day.

Because of the injury the cats started taking really good care of the little pup. They adopted him instantly, and wanted to make him part of their family.

All three of them started spoiling him at any moment. They would adore him, while he was sleeping because they truly loved him since the first moment they saw him.

Naps were never the same if Nicholas was not part of them. And they made sure to curl around him just to make him feel cozy, and safe.

And once the little pooch was awake, his sisters started spoiling him with kisses, hugs, and lots of belly rubs.

Little by little Nicholas started growing up, and he would sleep in the most adorable ways with his toys. Look at that little chubby belly filled with milk you guys. Isn’t he adorable?

And once he started growing, he was craving food. Bus since his mommy is a vegetarian, this little baby gets to eat only fruits and vegetables, and I can tell that he likes them.

No matter who loved him the most, this cat was mommy to him. His owner says that Nicholas is always looking up to her. She is his angel!

And the other two look like his partners in crime. This trio looks too cute to be innocent, don’t you guys think so? 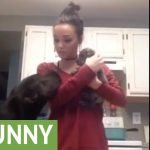