This is so sweet. The poor dog was wondering on the streets and felt very thirsty too. So once the girl in the video noticed him, she reached her hands under the drinking fountain that was nearby. She did not do it once, not twice but four times she went and gave him water from her hands.
The dog after he drank as much as he felt to, he reached his paw into her hand to show her how grateful he was for her gesture and licks her hand. A dog as gentle and kind as this one does not deserve to live in the streets. 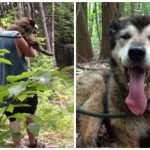