The poor thing felt into a 30-foot sinkhole with no chance to make it out of there on his own. He was missing for eleven days when someone spotted him and made a call.

The volunteer fire company respond to a call they got informing them about the situation and arrived in the scene as soon as they could. After analyzing the situation they decided to widen the hole at the top.

Doing that allowed them to lower some equipment down. Lucky with the cooperation of the dog was even easier to bring him up to safety. Despite a little scuff on his nose he was not injured elsewhere. 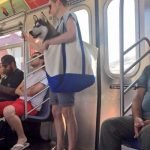