When Dad was watching an action movie the other night, his Husky quietly snuggled up to him and curiously stared at the TV screen. The Husky was overwhelmed at the sight of the many cars racing around throughout the movie. By the end of the movie, the Husky had a wide smile on his face and Dad knew that his pooch had thoroughly enjoyed the movie!

However, Dad had never expected to see a new side to his dog’s personality! After watching that movie, the Husky became a complete fanboy of cars! He badly wanted to see another racing movie!

But one day, the Husky decided to alter his very howls as an ode to his inner fanboy! He began imitating the sounds of a speeding race car every time he howled, and thought no one would notice! When Dad discovered his baby’s “new and upgraded” howls, he had no clue how to react. But he knew he had to share his Husky’s unique quirk with other animal lovers!

In this hilarious clip, we see the Husky howling to imitate the sounds of an accelerating race car. His eyes intensify with laser-like sharpness as he roars some long-drawn-out “VROOMS”, and even replicates the sound of gear shifts accurately. This is simply unbelievable! We are in love with this racecar enthusiast! 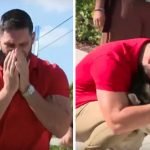