Kylie Jenner loves puppies.
Just a couple of weeks after her Italian greyhounds gave birth to two puppies, it seems the teen reality star couldn’t resist showing off another cute pup that’s part of her extended menagerie.
Kylie Jenner shared video on Snapchat Sunday showing herself with what looked to be a tiny husky mix.

In the clips Kylie is barelegged and barefoot wearing black short shorts and a mustard colored long shirt.

The black and white dog is leaning against her leg.

The 19-year-old also shared an image of the pup sitting outside by itself while her other pets are in the distance in a group.

‘He’s having a hard time fitting in lol,’ she wrote.

Cute pup: The puppy leaned against the 19-year-old in the selfie as she went barelegged in short shorts and a long t-shirt.

Might not be hers though: Just a couple of days ago, her boyfriend Tyga’s son King Cairo was seen in video posted to social media playing with the same puppy.

However, it could be that Kylie is not the official owner of the puppy.
Just a couple of days ago her boyfriend Tyga’s son King Cairo was featured in video posted to social media playing with the exact same dog.
Big half-sister Khloe Kardashian also dropped by to play with the blue-eyed fluffy pup.

Later in the day, Kylie posted video of herself with the offspring of her Italian Greyhounds Bambi and Norman.

Adding to the collection: The 32-year-old reality star got a cuddle with the latest addition to the collection of dogs owned by Kylie as show sat on the floor in heeled boots and Adidas top 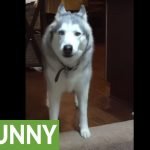