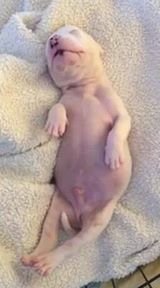 Three tiny puppies were found inside a box, abandoned and left to die. The poor babies hadn’t even opened their eyes yet, they were only 9 days old.

They were found by the control officer of that area during a weekend, who immediately called the animal shelter about the tiny three puppies. Eventually he kept and fed them only during the weekend, to leave them in the shelter first thing Monday morning. From there they were sent in a foster home.

Since they were so little and needed intensive attention and care they rotated from a foster home to another in order to share the time the puppies needed between them. They were found in a very fragile state, and the fact they were newborns did not helped the case.

They needed to be fed every two hours, and also they had to stimulate them to go potty. The first few days were really hard for the team to take care of them, but fortunately short after that they started to recover pretty well.

Now that they are a little bit older they have opened their eyes completely and have even started to crawl around. They are completely healthy and have started to develop their own characters, so sweet.