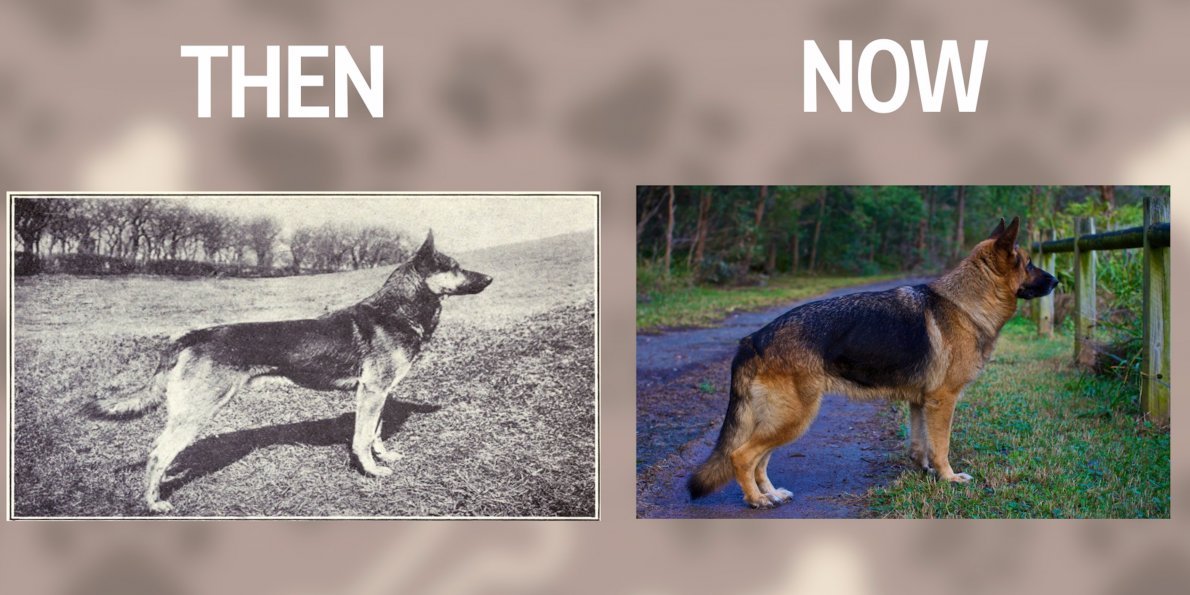 Artificial selection in dog breeding has influenced behavior, shape, and size of dogs for the past thousands of years. Over these years hundreds of dog breeds have been developed and nowadays some of them have certain characteristics they never had before. 100 years evolution of dogs! How they were and how they are to these days.

The dogs on the left are from the 1915 book, ‘Breeds of All Nations‘ by W.E. Mason. The examples on the right are modern examples from multiple sources. ( VIDEO )

Once a noble working dog, the modern St. Bernard has been oversized, had it’s faced squished in, and bred for abundant skin. You will not see this type of dog working, they can’t handle it as they quickly overheat. The diseases include entropion, ectropion, Stockard’s paralysis, hemophilia, osteosarcoma, aphakia, fibrinogen deficiency. It seems incredible that at one time the Bull Terrier was a handsome, athletic dog. Somewhere along its journey to a mutated skull and thick abdomen the bull terrier also picked up a number of other maladies like supernumerary teeth and compulsive tail-chasing. The German Shepherd Dog is also a breed that is routinely mentioned when people talk about ruined breeds; maybe because they used to be awesome. In Dogs of All Nations, the GSD is described as a medium-sized dog (25 kg /55 lb), this is a far cry from the angulated, barrel-chested, sloping back, ataxic, 85-pounders  (38 kg) we are used to seeing in the conformation ring. There was a time when the GSD could clear a 2.5 meter (8.5 ft) wall; that time is long gone. The Basset Hound has gotten lower, has suffered changes to its rear leg structure, has excessive skin, vertebra problems, droopy eyes prone to entropion and ectropion and excessively large ears. The Pug is another extreme brachycephalic breed and it has all the problems associated with that trait – high blood pressure, heart problems, low oxygenation, difficulty breathing, tendency to overheat, dentition problems, and skin fold dermatitis. The highly desirable double-curl tail is actually a genetic defect, in more serious forms it leads to paralysis. A shorter face means a host of problems. The modern Boxer not only has a shorter face but the muzzle is slightly upturned. The boxer – like all bracecyphalic dogs – has difficulty controlling its temperature in hot weather, the inability to shed heat places limits on physical performance. It also has one of the highest cancer rates. The English bulldog has come to symbolize all that is wrong with the dog fancy and not without good reason; they suffer from almost every possible disease. A 2004 survey by the Kennel Club found that they die at the median age of 6.25 years (n=180). There really is no such thing as a healthy bulldog. The bulldog’s monstrous proportions make them virtually incapable of mating or birthing without medical intervention.