From the time I was young I had always wanted a Husky and after meeting my now Fiancé (who shared the same love for the breed) we found a rescue and filled out paperwork. As we waited, days turned into weeks, as we waited for a response back. We finally emailed the rescue asking if our application had been reviewed yet. They said it had and it was denied because I was a full time College Student and we were “too young”. I explained to the rescue that I would prefer to
adopt a dog from them then a breeder and even told them I could provide more referrals but they didn’t care, they focused on how young we were.

After that situation It took us a few weeks to actually find a breeder that suited our needs and wants in a dog. The breeders treated there dogs like babies and only bred their dogs for a high quality personality. They didn’t care about looks and neither did we! We wanted a dog that would love us just as much as we loved them!

After contacting the breeder and making sure we “weren’t too young” we patiently awaited the birth of the liter we had first pick from. A day later the mother went into labor and we were able to pick our baby! We decided on the one who was eating the most. As weeks went by we pondered name after name and finally ended up with Gordon ( after Gordon Hayward who at the time played college basketball at Butler University and now plays for the Utah Jazz ).

The day we drove to get Gordon felt like the longest day in history! We both had work/class that day and were so anxious for our 10 hour road trip. As we started on the road we hit stopped traffic about half way there. Which made us even more anxious! I felt awful because it pushed us back 2 hours and it put us getting to the breeders home at 10pm. But the breeders did not care they were excited for us and couldn’t wait for us to meet our baby boy and his canine parents. Upon arrival we both jumped out of the car and raced to the door. As the door opened there was Gordon!

Tiny as could be with big blue eyes; he was absolutely perfect!! After getting Gordon home we noticed he was not acting normal. He was vomiting a lot and had watery bowel movements. We took him to the vet for months!! Week after week they kept putting him on so many meds.

They called it “trail and error”; I called it bad for my puppy. But they tried to assure me it was ok for him to be on that many medications at that age. Finally I said enough was enough, Gordon was loosing weight, not eating, and was serverly dehydrated. All of these vet visits and medications had taken it’s toll on our baby. I told my fiancé, and as bad as it hurt me saying it, it was time to let nature take it’s course. After a months of being sick Gordon woke me up one

morning by licking my face vigorously and whining, thinking he just needed to go potty I pick him up and brought him outside. As I placed him in the grass he started hopping around, something he hadn’t done the whole time we had had him! I called my fiancé, who was at work,

and told him Gordon was actin like a puppy. Gordon from that day forward started eating food and drinking water like it was going out of style! He began having solid bowel movements and began to put on the weight finally! Today Gordon is a woping 90 lbs and is every bit of baby as it gets! He is his daddy’s best friend and mommy’s little sunshine! Because of Gordon’s malnurishment as a puppy he is dwarfed from how tall he was supposed to be. For everything that he went through as a puppy, freshly taken away from his canine mommy, I will take my short legged baby any day! Gordon means the world to us and we wouldn’t trade him for anything in this world! (This is a story from one of our fans on Siberian Husky Fan Page on “Facebook”) 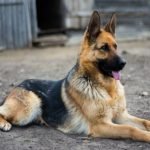