This is such a sad story of a puppy, and a little boy. It all started when Haatchi was a little puppy; he was tied to a track and then hit by a train! Miraculously he survived for five days until they rescued him. His tail was severed and his rear leg had to be amputated. The Anatolian Shepherd was able to change a little boys life who suffers from a rare genetic condition. The young boy named Owen Hawkins has Schwartz-Jampel syndrome, a condition that causes his muscles to seize involuntarily. He had severe social anxiety and became withdrawn at school and around strangers. Follow the pictures below, and the video to see how much they have both improved, thanks to each-others support!
1- Haatchi and Owen are inseparable. They spend a lot of time together, they play together, and they support each-other in everything! Owen’s parents say that these two have a such a strong bond! 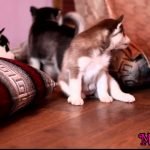 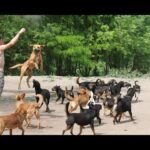