It is very hard when your pet gets lost and the days go by without any sign from him. A little pup was lost and feeling scared being out on the street alone. She went under a car trying to feel safe.
A woman passing by noticed her and called ‘Help for Paws’ notifying them and asking for their assistance. She tried her self to get the dog out by offering her food but nothing. When the rescue team arrived they firstly put a fence around the car so she would not run out on the street where there where cars passing. Then little by little and a lot of patience they approached to her with food again until they were able to put the leash and guide her out.

Once the pup was safe, the rescue team checked her for a microchip and she had one which meant that someone was missing and looking for her like crazy. In the meantime she was sent at the Hope for Paws facilities to wash and feed her. After a few hours her owner Dave arrived and he could not be more thankful. 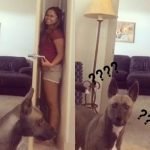