One beautiful day a man who was occasionally walking down the street, saw a pile of trash in the middle of the street. Very confused he approached, and what he saw was just very confusing. The pile of trash had two big black wyes, and was moving. Oh hell, the pile of trash was actually a little puppy. He called Quebec Society for the Protection of Animals. They immediately took the homeless dog, and prepared a group of six to take care of him.

First thing they had to do, was cutting all the dirty hair the dog had. The situation was so complicated that the dog couldn’t even walk. It took them almost three hours to cut down all the ratty dirty fur. 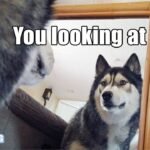