I don't believe Messi's chapter at Barcelona is over," Laporta told ESPN.

In a manner, Lionel Messi also participated in Saturday’s El Clasico in Las Vegas, not only because of the numerous No. 10 jerseys scattered throughout Allegiant Stadium, but also because Joan Laporta had some complimentary things to say about him.

The Barcelona president discussed Messi with ESPN after meeting up once again with Real Madrid and Juventus to talk about the Superleague.

Laporta asserted that Messi’s chapter at Barcelona was still open. “And I think it is our duty to ensure that that chapter is still open and hasn’t been closed.

“To have a chance to finish it the right way so he can have a far more glorious ending than what he had,”

Laporta acknowledged having concerns about the manner in which Messi left the team.

“If I believe I owe him something? Yes, “said Laporta. “I believe that I acted morally as Barcelona’s president by taking the appropriate action. But I think I owe him one personally, as well as in my capacity as president of Barcelona.”

The Argentine striker’s departure from Camp Nou a year ago still has an effect on the team and the supporters.

Meanwhile, Messi is aware that PSG will extend his contract. 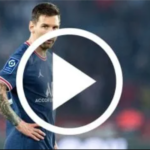