Paris Saint-Germain’s Lionel Messi, Kylian Mbappe and Neymar were all on the scoresheet against Maccabi Haifa for the second time this season as the French champions recorded an emphatic 7-2 win at the Parc des Princes on Tuesday to secure a place in the Champions League last 16.

The star attacking trio each found the net to put the hosts 3-0 up inside just 35 minutes. Messi then produced another sumptuous finish just before the interval to complete an eye-catching first-half attacking display.

There was little letup in the second half, with Mbappe curling in for his second before an own goal from Maccabi’s Sean Goldberg and a seventh goal by substitute Carlos Soler completed the rout.

Messi, Mbappe and Neymar also all scored in the reverse fixture in Israel last month when PSG won 3-1. Prior to Goldberg’s own goal on Tuesday, PSG’s last 19 Champions League goals had been scored by a member of the “MNM” dating back to last season.

At the other end, there were some brief signs of defensive fragility, with Maccabi Haifa defender Abdoulaye Seck twice able to find the net with headers from set-pieces either side of half-time to make the score 3-1 and then 4-2.

The victory, though, was never in doubt, leaving PSG to clinch their place in the Champions League knockout stage with a game to spare.

Christophe Galtier’s side are level on 11 points with also-qualified Benfica but now have a comfortable edge on goal difference. PSG will travel to Juventus in the final round of group fixtures next week, while Benfica visit Maccabi Haifa. 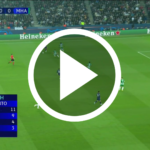