Lionel Messi continues to rack up goals in his second campaign with Paris Saint-Germain.

Messi was able to make something out of nothing over the first half of PSG’s UEFA Champions League home group stage fixture against Maccabi Haifa. As Kylian Mbappe was unable to get a shot off in the penalty box, he decided to dish off a pass to a waiting Messi.

The Argentine forward took it from there, scoring a stunning left-footed goal for his third score of this season’s Champions League competition. 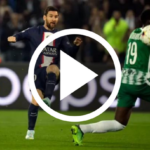