The resemblance between dogs and wolfs is obvious. Especially some dog breeds look more alike wolves that others. But even if we go back centuries in time, will see that dogs are descendants of wolves. Actually they are classified as subspecies of the grey wolf. For a fact dogs are originally descendants of an extinct genus that diverged from what is known as the grey wolf nowadays.

Therefore the genetic similarity among these two species is inevitable. However wolves are way stronger and have higher stamina than dogs. Not only are they different in strength and durability but in temperament as well. Wolves are born to live in packs and on the wild therefore training them is very difficult. They tend to be erratic, stubborn and a danger to other small animals and children as well.

Wolves appear almost majestic in our eyes, and maybe that is why many people raising one as their pet. Since wolves would be a poor choice to keep as pets, consider getting a dog that looks like one.

#1 Alaskan Malamute- they are strong and durable in long distances. Alaskan Malamute is as friendly as he is powerful and best of all this breed does not bark, making them an excellent choice for pet owners. They are loyal, intelligent and can survive in harsh conditions. Although they wouldn’t fit perfectly in families that have other small pets due to their fairly developed prey drive. They have big fluffy fur and come in varies colors such as gray, red, white etc.

#2 Siberian Husky- huskies have thick fur that comes mostly in shades of gray, black, white, silver etc. They ears are  triangle shaped and they fall into the category of medium-sized dogs. All these characteristics make them very similar with wolves. Although Huskies might be hard to train and quite stubborn just like wolves are they are very loyal and friendly on the other side. Even they barking comes more in the form of a howl and have a strong need to belong somewhere and be around other dogs or people. Huskies are well behaved around children and are considered as good family dogs, but they do require a lot of activity and special needs. #4 Kugsha- is also known under the name Amerindian Malamutes and they as well are wolf hybrids. They size is  somewhere between Siberian Huskies and Alaskan Malamutes. They are quite strong and love to travel. Their well built physic allow them to travel across long distances while carrying heavy loads. #5 Samoyed- these Russia originated breed is well built, strong and broad-headed. They seem always happy cause of the characteristic smile that is always on their face. They are calm, friendly, alive, pleasant dogs and good companions. What is there not to love about these gorgeous breed. Well the only upside down they have is that they are prone to varies congenital health problems. #6  Tamaskan- these breed is relatively new as they were bred to look like wolves. They became more widely known after 2013 and therefore they are quite rare, with only 600 of them counted as certified Tamaskan. They exceptionally good with children because of their social personality. They do not do well when left along for long periods of time and like Huskies they require intensive exercise or otherwise they become destructive. #7  Canadian Eskimo Dog- known as Qimmiq as well, this breed has been use as a working dog to hunt or pull sleds.They are quite large, weighing up to 95 pounds. During 2008 was noticed that there are only 300 of them left making them follow in the category  of endangered species. These breed is strong, loyal, tough, smart and energetic. They are made to live in cold weather as their body does not handle heat very well. Canadian Eskimo Dog is a breed with high prey drive therefore they would be a great fit only with families that do not own other dogs, especially small ones. #8 Northern Inuit Dog- They are a kind of crossbreed developed in UK, originating from German Shepherds, Inuit and Siberian Huskies with the intention of being used as a working dog that resemble wolves. They have medium build bodies with fur thickness and colors that make them look exactly like wolves seen by far. Being originated partly from Huskies they are quite difficult to train and stubborn. Yeah, not a great choice for an inexperienced owner. They do best with families that own other dogs as they tend to suffer from separation anxiety when left alone. #9 Utonagen-  these dog was bred in England, with the goal of producing a dog breed similar with wolves. Utonagen are a mix bred between German Shepherd, Siberian Husky. #10 German Shepherd – The second-most popular breed in the United States and fourth in the UK, German shepherd dogs are also known as Alsatians in Great Britain and other parts of Europe. An excellent breed, they are. They are known for their intelligence, making them ideal for police work. They are highly trainable; in fact, many of them are trained as police dogs. They assist police officers in search and rescue and other police tasks.

One of the more known wolf-like dog breeds, German shepherds are very energetic and enthusiastic dogs. They always need something to do; otherwise, they’ll get bored and can be destructive. They have the tendency to become aloof and very protective of their owners, so they need to be around with people and other dogs often. 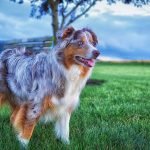