It is not inconvenient at all when you have to deal with stubborn dogs especially while you are trying to train them. Some might say they are foolish that why they act like that but actually I do believe that they just are smart enough to have a say in the equation.
Here is the list of the most stubborn dogs to train.

#1 Basset Hound tend to be very moody. If they feel like it they can be like angels but if not they they want even move from where they are sitting no matter what.

#2 Beagle are unmanageable. Practically they love to do whatever they want to. If does not want to do a command he just wont by showing an increased obstinacy.

#3 English Mastiff despite their good character of sensible, strong and reliable they can be very difficult to train. If you will say a command in an angry voice there is no way he will obey.

#4  If Pekingese Dogs are not trained on an early age it can be almost impossible to manage. They bark constantly and show molestation.

#5 Bloodhound can not be subordinated. In order to train them, you have to persuade them somehow in order for them to do what you want. The cool thing about this breed is that they are excellent trackers and can remember about 1000 kind of smells.

#6 Russian Greyhound act more like cats than dogs. They are generally owned by wealthy people who unintentionally spoil them to that point that makes them selfish.

#7 English Bulldog are discreet but also tend to be apathetic. They act as they feel and since their mood changes very rapidly no one knows what to expect when from them.

#8 Basenji is a very unique breed. They bark sounds like talk, laugh or even cry. If anyhow they are feeling lazy it does not matter what you do, they just wont listen.

#9 Shih Tzu are one of the most stubborn of them all. When they don’t like something they become very angry.

#10 Chow finds it difficult to understand what the owner wants in the first place. They are very slow, lazy and really hate running but despite all they can really be a mans best friend. 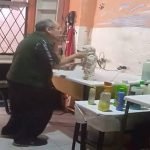