Husky mimicking mom’s laugh is a video that focuses on interactivity between dogs and humans. The consolidation of our relationship has come as a result of living with dogs for several decades. Initially we accepted canines into our homes, and then they became comfortable becoming the real owners of our properties.

Lola and Fang are a Siberian Husky couple with a personal account on Tiktok. A video of them is recently going viral on the network showing thus their funny sides. Released on December 1 with an hilarious reaction, it is a must see video for sure. Being well aware of their personalities, their human created a beautiful memory.

She made a video regardless of the success that would follow. In the video the person laughs lightly enough to tease the puppies, who immediately start imitating her laughter. A situation which attracted network attention in record time, bringing the video so far to 20.6 million views.

After watching the video you will understand the real reason for the success of the video. I think that the success of Husky mimicking mom’s laugh came as a result of the naturalness that the characters have with each other.

As the content of the video was very entertaining it was immediately published with the caption:
She fully mocked my laugh 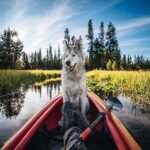 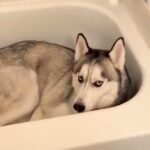