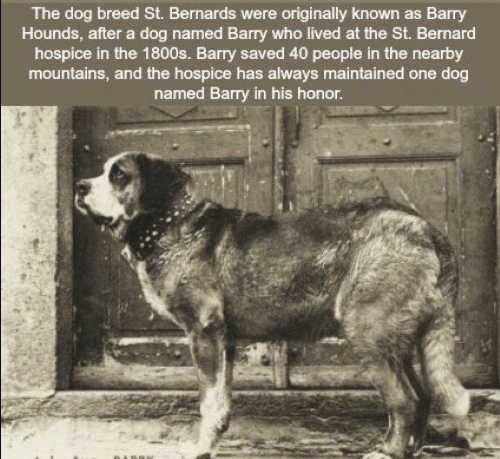 Bamse was a Saint Bernard that served aboard a Norwegian minesweeper during World War II. Despite his cute and cuddly appearance—Bamse means “cuddly bear” in Norwegian—he was extremely tough. Bamse was originally brought on board by the ship’s captain. When the captain tried to take Bamse with him when leaving for another posting, the crew, who had grown fond of the dog, threatened to leave the ship if he was taken away. They loved the dog so much that they would have mutinied rather than lose him.

Bamse became legendary in Dundee and Montrose, where the ship was stationed during World War II. He rode buses alone with a specially made bus pass tied around his neck, made sure that drunken sailors made it back to their posts, and allegedly put a stop to bar fights. Once, he rescued a crewman who’d fallen overboard by diving in to drag him to safety. He rescued another crewman cornered by a knifeman by barreling into the attacker and dragging him into the water. But Bamse was more than just a hero—he was also a peacemaker. It was reported that when sailors got into fights on board, he forced them to stop by standing on his hind legs with his paws on their shoulders as if to say, “Calm down, it’s not worth it.” And Bamse wasn’t just famous in Scotland, where his ship was based—every Christmas, he was dressed in a little sailor’s hat and photographed so that his picture could be put on Christmas cards and sent to the crewmates’ relatives in Norway.

Swansea Jack was a black retriever who lived with his owner William Thomas near the River Tawe in Swansea, Wales, during the 1930s. One day, Jack saw a small boy drowning in the river and ran in, pulling the boy to shore by the scruff of his neck. There was no one around to see it, and had circumstances been different, the boy would probably have spent the rest of his life telling the story to people who would never believe him. But Jack wasn’t done. Within a few weeks, Jack rescued another swimmer, this time with witnesses in attendance. And then another. And another. And so on. Over the course of the next decade, Jack was reported to have saved at least 27 people from, presumably, the most dangerous river and docks in Wales.

For his efforts over the course of his lifetime, Jack was given a silver collar by Swansea council, the Bravest Dog of the Year Award, a silver cup from the Mayor of London, and his very own statue. That’s more accolades than your average Batman. And he’s still recognized today—he was probably the inspiration for the nickname of Premier League football team Swansea FC, “The Swansea Jacks”.

Bob was born in South Australia in 1882, and for some reason he loved trains. He spent the early years of his life as a stray, following railway workers to work, until he was rounded up by a dogcatcher. It looked as if he was destined for the pound, but luckily for Bob he was bought by a kindly station guard who’d taken a liking to him. It worked out well, as his new master allowed him to ride the train with him in the guard’s van every day. But, eventually, his master got a promotion and he and Bob parted ways. Then Bob started to  jump trains alone.

Bob traveled up and down Southern Australia, becoming a familiar and welcome sight on trains across the land. Sometimes, when Bob felt that he needed some privacy, he chose an empty carriage and scared away any passengers who tried to sit in it by  barking like crazy. The station masters and guards all knew him by name, so they left him to his own devices. At night he followed the engine driver home for a warm meal and soft place to sleep, then returned to the train the next morning. For most of his life, Bob went where he pleased, and as his fame grew so did his reception when he rode into town. He was allowed to attend banquets as a guest of honor, was given a special bracelet with his name on it—with an engraving telling anyone who read it to let him go where he wanted—and when he was seen riding on trains by local children they ran after him as if he were the Pope. Bob had many adventures in his short life and died  the most famous dog in Australian history.

In the 1860s, two stray dogs called Bummer and Lazarus were given the run of the city of San Francisco at a time when any other stray dog would have been rounded up and thrown in the pound. But Bummer and Lazarus were different—they were celebrities. The newspapers of the day reported their doggy exploits as if they were Posh and Becks or Brad and Angelina. If they got into a fight with rival dogs, the papers often printed an exaggerated account of it the next day, complete with eyewitness testimony and a dramatized cartoon of the event. Even Mark Twain took time out from working on Huckleberry Finn to  write about them.

The reason they were so beloved was due to their close friendship. Bummer started off as tough mutt who begged people for scraps, hence his name. When another stray arrived in the city and lost a fight, witnesses thought he’d be torn to shreds…until Bummer came running in to fight off his attacker. As Bummer nursed the injured dog back to health, it was given a new name—Lazarus. Their legend grew and every twist and turn of their friendship was reported on. When Bummer was shot in the leg and Lazarus didn’t look after him, there was uproar, with the whole city turning on Lazarus. This weird press fascination went on until both dogs died. And even after that, the coverage continued, with each newspaper accusing the other of publishing erroneous details about  the dog’s deaths.

The Saint Bernard is a dog that was specifically bred for a single purpose—to search and rescue. Monks at the Saint Bernard Pass, a dangerous, snowy divide between Switzerland and Italy, bred them for hundreds of years—perhaps even as far back as 1695—to rescue travelers who got lost and buried in the snow. They traveled in pairs so that when they found a victim, one dog could dig them out and sit on them for warmth while the other headed back to the monastery for help. Which brings us to the second Saint Bernard on our list—Barry, who saved 40 people’s lives over the course of 12 years in the early 1800s.

Barry’s most famous rescue was of a small child who’d become lost and trapped on a treacherous ice shelf. Barry managed to reach the boy, revive him, and keep him warm until rescue arrived. But even then, nobody could get to them. So Barry allowed the child to climb onto his back and pulled him to safety, inch by inch. Barry was so effective as a rescue dog that after his departure there was always one dog at the monastery named Barry—a tradition that  persists to this day.