Everyone I would like to introduce you to an animal lover couple, and their very unusual pet named Stepan. Stepan here is a domesticated bear who lives with his humans Svetlana and Yuriy Panteleenko in Moscow, Russia. The couple adopted Stepan when he was just a 3-month-old orphaned cub. They got him from some hunters who found him all alone and in a very bad condition in a forest. The couple felt really bad about the poor little creature, so they decided to keep him home.
Now, 23 years later, Stepan has grown into a loving bear. He loves to sit around the house with his loving family watching movies and snuggling. 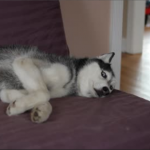