Juventus risk missing out on the Europa League as well after Champions League elimination, but fans in Turin flocked for a glimpse of the visiting PSG stars anyway.

The final group game kicks off on Wednesday at 20.00 GMT at the Allianz Juventus Stadium in Turin.

Paris Saint-Germain and Benfica have already secured their place in the Round of 16, so are still battling for top spot.

The Bianconeri and Maccabi Haifa will fight it out for third place and access to the Europa League, with the risk Juve will be kicked out of Europe altogether.

The fans aren’t too upset, as circa 1,000 stood for hours outside the hotel to greet the visiting PSG players like Gianluigi Donnarumma, Marco Verratti and Lionel Messi.

Keylor Navas and Presnel Kimpembe did not make the trip due to injury. 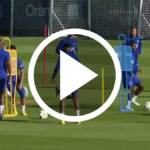