Paris Saint-Germain’s attacking trio of Lionel Messi, Kylian Mbappé and Neymar were in scintillating form as the French side qualified for the Champions League knockout stages with a 7-2 win against Maccabi Haifa.

Messi and Mbappé both scored twice, while Neymar and Carlos Soler added goals in each half on top of an own goal from Sean Goldberg.

In a rampant first-half display on Tuesday, Messi opened the scoring for PSG after exchanging passes with Mbappé and curling a shot beyond the reach of Maccabi goalkeeper Josh Cohen.

French international Mbappé then scored PSG’s second from an almost identical position inside the box as Messi, only with his right foot.

Neymar got his name on the scoresheet as he finished off a fluid counter-attack involving Messi and Mbappé, but Maccabi pulled one back minutes later through Abdoulaye Seck’s header.

With halftime approaching, Messi made it 4-1 with superb strike from the edge of the area, in the process becoming the first player to score 80 Champions League group stage goals – seven more than Cristiano Ronaldo.

Seck reduced the deficit once more with a header in the second half, but PSG soon cut loose.

Mbappé’s fine strike just after the hour mark made it 5-2, taking him to six Champions League goals this season – one more than Erling Haaland, Robert Lewandowski and Mohamed Salah at the top of the scoring charts.

Goldberg’s own goal and Soler’s finish completed the rout for the home side, while Messi was denied a hattrick by the underside of the crossbar.

According to Opta, the 35-year-old Messi became the oldest player to record two goals and two assists in a Champions League game – evidence that he is hitting his stride ahead of Argentina’s World Cup campaign next month.

While Messi might be in the final years of his career, PSG handed a Champions League debut to midfielder Warren Zaïre-Emery, the club’s youngest player to feature in the competition at the age of 16 years and seven months.

The victory means PSG qualifies for the knockout stages alongside Benfica, but may need a strong performance against Juventus next week to top the group.

“The team played fantastic football in a decisive match in terms of qualifying for the next round,” said manager Christophe Galtier.

“I will reiterate that qualification has been achieved, but we need to go out and secure first place in Turin.

“The stakes will be very high for all four teams in this group, but the team played fantastic football, with a lot of flair, lots of technical quality, lots of play between the lines, lots of attacking play. And for me, they really enjoyed playing together.” 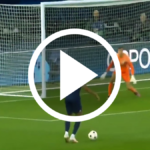 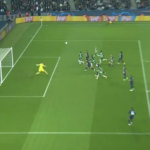