A gigantic 400kg anaconda has given Brazilian construction workers a fright, after it was discovered lurking inside a cave.

The reptile was reportedly found by builders after they carried out a controlled explosion in the Belo Monte Dam, in the northern state of Para.

The snake’s body reportedly measured about 10m long and one metre wide, the Sun reports.

It’s unknown when the snake was found.

It’s unclear whether the snake died due to the controlled explosion or if it was killed by the workers, however the workers have been criticised for taking photos and video with it afterwards.

Video of the reptile was uploaded to YouTube, which shows a pan of the snake’s enormous body.

The worker’s were seen lifting the snake up to show its spotted belly, a move which was criticised by viewers.

“I’m not sure this is real, but if it is, shame on these people for killing it! A snake that big has probably been alive for a very long time now, just to be killed for a few pictures? What a waste,” one user wrote.

Another said: “Human be like ‘oh look a giant rare snake and it maybe the last species on this earth, so lets kill it and show it to the world’.”

The Guinness World Record for the longest snake in captivity is currently held by Medusa, a snake in Kansas City, US, which is 7.67 metres long. 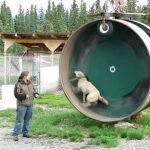