An epileptic shelter pooch named Freya who is ‘the world’s loneliest dog’ was chosen to star in a Hollywood blockbuster along with Sir Anthony Hopkins! Not only did this turn the doggie’s world upside down; it also introduced her to some A-listers and glamorous filming sets and helped her to find a loving forever home…

This dog version of Cinderella started when film director Michael Bay read an article in the British media about a Staffordshire bull terrier pooch who spent the first 6 years of her life in Freshfields Animal Rescue Center, and was rejected by potential owners more than 18,720 times.

Bay found it heartbreaking and tweeted: “We gave the Loneliest Dog a role in Transformers.” The director, who is a huge dog-lover, also promised to help her find a home.
Fast-forward, and not only did Freya do a great job starring in a movie, she also found a loving family to adopt her.. 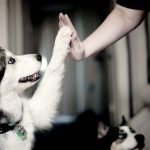