We present to you this eleven year old Staffordshire Bull Terrier that has become somehow famous due to her very loud bark.
When she was found, a while ago and brought to the nearest animal center, she had a severe infected and swelled ear. During the procedure of her treatment it was necessary to remove the drum only from her left ear.

Although her bark is very loud to not say the loudest on the shelter, the workers say that maybe she has a reason for doing that. The poor thing might be just trying to hear her own bark. Is the same feeling as when we have headphones on and try to make conversation at the same time. Without even realizing you speak louder than normal right?

Unfortunately, this has become a problem when it comes to adoption. She is eleven years old now and even those few people that were very interested on her, where sent off by her loud bark. But if you think about it she could be perfect as a guard dog for large properties. 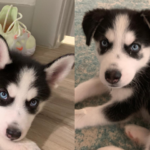