The story of this duo is heartbreaking. The poor man was obliged to surrender his beloved puppy to a shelter because he could not fulfill his needs anymore. He recently was homeless and could not take care of him.

It was very tough and hard to let go of his dog but he knew that his pup would be in way better hands and care than with him. Sometimes life hits you so down, but you raise up again and try to do the best you can.

After sawing her daddy leave, she was feeling confused about this whole situation. She could not understand what was happening.

Even though she was left behind, the German Shepherd knew that there was a good reason behind all this, and she was determined to find out. Amazingly she was able to pass through three closed doors that separated the shelter with the street.

After only three days she was found near her former household, where she used to live with her former owner. This time the shelter made sure to increase security inside the facility, to prevent any future attempts from her.

The poor thing did not find her former owner after the escape but we do hope that she will be adopted very soon from a lovely family. 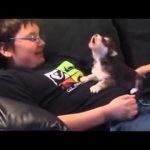