All of these started the day that this man saw a tiny gosling drawing at the lake and saved her. Little did he knew that act of humanity would give him a new best friend.

At first he took her home to gather herself, and than to release her in the wild soon after. But apparently the gosling got very attached to the man and refused to leave his side.

This has been going on for two years know!

As the man said that, he has tried varies of times to get rid off her by driving her with the car miles away from home, only to find her waiting for him at the porch. Even leaving her in the middle of now where did not do the trick, there is not much left to do.

She even acts very defensive around him, especially with woman. She does not like it when girls come over, and she makes sure to let them know that.

Although he acts tough, he already confessed that he is drawn to the goose as much as she is drawn to him. Even the times he does leave her far away from the house is more like a game to encourage her to exercise. 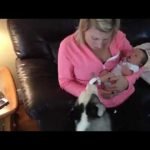