Despite the awareness that several animal organizations raise about cruelty cases of abandoned pets, it is surprising how often still happens to rescue pets left in terrible conditions.
When a pet is left in the streets alone, you practically have killed him. They are incapable of providing for them selves when raised in domestic environments. Days pass by, the temperatures drop at night, food is no where to be found and they end up starving.

Occasionally they are found and rescued by volunteers in animal shelters, organizations etc. But there are plenty other dogs and cats that do not get the chance to be that lucky.

Fortunately in this article we have a success story of five rescued puppies that were left inside a plastic container on the side of the street. After the rescue they were sent to the facility to be treated. 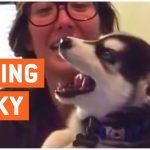