A brilliant photojournalist, Thurston Hopkins captured thousand of photos due to his line of work that reflect on the lifestyle of those years. Surprisingly, although he was a very experienced and valued man for his art, it was the album ‘Cats of London’ in 1951 that made him well known for his unique photographs. The history behind those photos, and the stories they contain, seen in black and white by the public eye intrigue not only the art lovers, but the cat lovers as well.
All of these pictures of felines were taken while he was wondering on the streets of London to complete his work assignments. All of the cats were homeless, they lived out in the cold and rain, surviving by the scraps that some friendly neighbors might have given them. And even if some of the photographed cats had home, it was normal during that time for them to slip out of the house after dinner time, since cat-flips did not exist during that time. In order to take these beautiful pictures the photographer attracted them with some food.

Now all the mystery of the 50′ in London is captured and shown to future generations to enjoy. 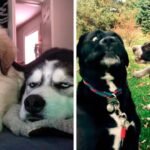