I’m not exactly sure what made this particular car in Turkey so delicious to this pack of feral dogs, but holy crap do they go to town on it. The pack of dogs manages to pull off the whole front bumper cover, along with some of the lights and other trim. Does the owner wax this thing with a chunk of ham?
The car belongs to a mechanic with the very mechanic-appropriate name of Cem Acar. The car was parked in the Mamara province of Sakarya when the dog-mauling happened, which is an industrial area.

According to the Hurriet Daily News, Acar at first thought the roughly $1600 worth of damage to the car was the result of an attempted theft:

“I went home with another car after parking my car in front of my shop. I was shocked to see the damage when I returned in the morning. We thought the incident was a theft attempt and called the police. Later we watched the surveillance camera footage with the police and we saw eight stray dogs tearing the car’s bumper into pieces.”
No, no theft. Just wild dogs, so you can rest easy.

The dogs appear to be very interested in the car, though it’s not clear why. They seem to be on the trail of something inside the engine compartment, and all the destruction was to get access to whatever’s in there.

A cat has been speculated, but no cat was seen in the security footage. Do they use ground beef air cleaners in Turkey? 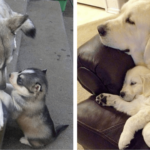