A tourist noticed a starving dog passing by through the streets of Bangkok, Thailand as he was enjoying his lunch out on the side of the street. He felt petty for the poor dog and reached to share some of his food with the dog. It was meat on a stick but to his surprise the dog didn’t reach back to get and eat it. Instead she hold it on her mouth and walked away.

As he followed her around the city, the moment she stopped and the man saw why she did what she did, his heart melted away. The starved dog had four puppies she needed to feed and that little food he gave her she fed her hungry babies.

Is there a gesture kinder and love deeper than sacrificing your own self for the wellbeing of your babies…The whole scene was captured in camera and went viral the moment he posted it online. Even in animal kingdom, the mother’s love is above all 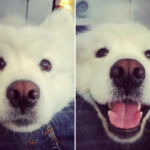