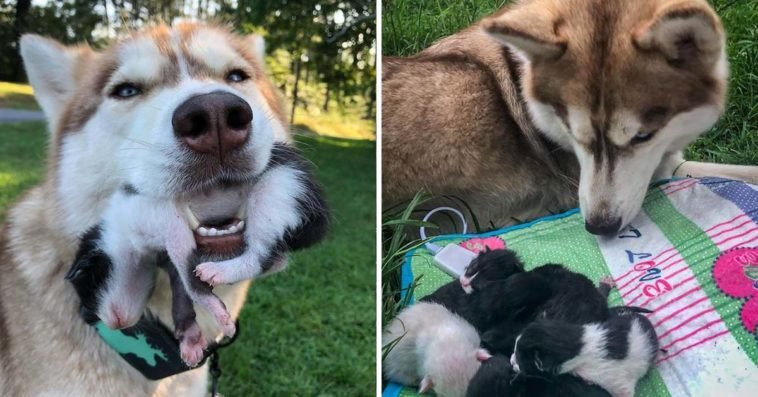 A brave Husky who has been hailed a hero after rescuing seven newborn kittens left to die inside a cardboard box in the woods – then taking on the role of their mother.

Banner, is a Siberian Husky, who assists her mom, Whitney Braley, as a medical-psychiatric service dog. Since a puppy, she has been with Whitney and has been trained to be alert during PTSD episodes and anxiety attacks. Whitney suffers from anxiety attacks caused by her post-traumatic stress disorder, and Banner helps her calm down and leads her away from crowded places.

However, Banner’s service dog superpowers aren’t her only special abilities. By day she is a regular service dog, but when not on duty, she helps animals in distress. And that’s exactly what happened when she made a touching effort to rescue newborn kittens from dying in a sealed cardboard box in the woods nearby their home.

Whitney Braley knew something was wrong when Banner, 3, suddenly became extremely distressed and kept pulling on her dress in a ‘state of panic’. She let her determined dog lead her into the nearby woods – only to discover Banner circling around an abandoned cardboard box ‘in the middle of nowhere’.

Whitney said her pooch dived straight in after she opened the box and pulled out a tiny white kitten – with the mum shocked to discover six more ‘barely alive’ kittens laying inside the box.

After bringing the newborn kittens back inside her house in Menlo, Georgia, USA, Whitney said Banner refused to leave their side. The dog also insisted on cleaning, cuddling, and napping with the seven kittens as if she were their mother.

“Someone must have just put them into a cardboard box, closed the lid tight and left them there to die”

It was clear that whoever had left the kittens there didn’t want them to be found. Banner’s super instincts saved the kittens. At first, Whitney thought they were dead, as she could see no movements or sounds — but then she noticed them start to wiggle.

Since that day, Banner hasn’t left the kittens’ side and has adopted them as if they were her own.

“Thankfully all the kittens found appropriate homes, that will love them forever”

“I’m so happy that now because of Banner, these kittens will go on to live their lives with loving families”

Please SHARE these photos with your friends and family! 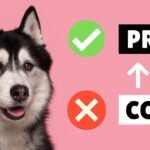 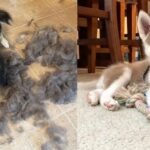