The story of the poor stray dog drowning in freezing water resembles a bit with Titanic. Just that in this case, there is a big difference since this one has a happy ending. The dog is saved by two man. They were road crews and saw the scene when the stray dog felt into ice cold water.
The moment they saw the dog fall in water, they jumped in a boat and set out to rescue him. They had to break the ice with oars because maneuvering with the boat was a bit difficult due to ice obstacles. They really did their best to get to the dog as quick as possible. We all know how quickly can one freeze to death due to the low temperature.

Luckily they got the dog right in time. If the poor pup would have been in the water just a few minutes longer maybe it would have been to late. After getting him out of there they took the dog to an animal shelter where the stuff could warm him up and take care of him. Job well done indeed! 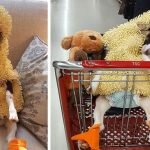