Love wins over everything, its triumph is seen even in this case where Officer Adopts Abandoned Dog to offer him a better life. It should be noted that adoption is the noblest action a person can take, because at the end of the day these actions make the difference. People should do acts of love every day in their own way. We all happen to think pessimistically saying, “I can not make a difference.” This is the biggest mistake we make.

Do you think Martin Luther King Jr. told himself that I could not make a difference? Certainly not. He believed in himself and in changing the system.

As did the officer in question. It was a cold, rainy day when NYPD Officer Michael Pascale first met Joey. Their first meeting was also the most important meeting of Joey’s life. His life changed completely from this moment.

As soon as the officer saw those sad eyes he made the immediate decision to adopt him. There were no second thoughts, only determination to save the puppy and care for his well-being. After taking the canine to the vet for routine checkups, Michael introduced his wife by sending her a pic of Joey. She also reacted instinctively by saying: “Bring him home.”

Pascale told The Dodo.“He’s just staring up at me with these ‘Help Me’ eyes,”. “My first thought was I’ve got to get him out of here.” “I don’t just see an animal,” Pascale said. “I see a soul. And that’s not something I turn away from. ”

After the vet check-ups went pretty well, Joey stayed in the animal center for 72 hours. No matter how neglected or mistreated an animal appears, there may be a distraught owner out there searching for them. A stray hold allows them time to locate their lost or stolen pet and come forward.

Michael Pascale showed up at the center to pick up the youngest member of his family. As the ecstatic pup showered him with kisses, Officer Pascale promised to keep him safe and never let him suffer abuse or neglect again.

What matters most in life is self-confidence and the desire to do good. If you want to be the difference, you will succeed. Love is the answer. 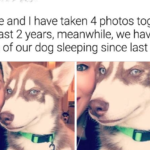 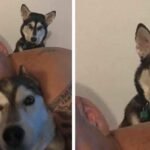