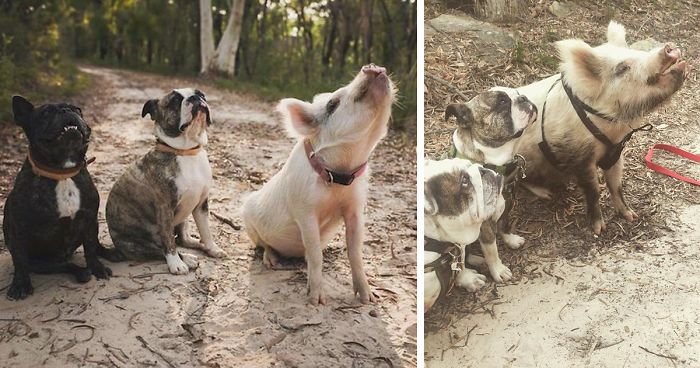 We introduce you with the piglet that acts like a dog and strongly believes to be one herself.

The piglet is adopted and lives with her lovely adoptive parents and has many dogs and pups as siblings.

It can not happen any other way, after spending that much time around canines you start to believe and see yourself as one of the pack. The pig spend every single hours of every day around dogs.

They play together, nap together and even eat together. The funniest thing is when the dogs run to the gate to bark at some passing passenger, she goes after them running as well.

When the couple decided to adopt the piglet they were a little bit nervous since they already were parents of four dogs. They did not now how well the dogs would welcome the newest family member, especially since she was not their kind.

What they never imagined was how warmly the dogs welcomed they new sibling. Especially the bulldogs reaction, whom they were worried about the most turned out to be the warmest from all the dogs.

The bulldog took immediately the role of the protective adoptive mum and it was the most beautiful thing ever.

The couple tries to capture moments from their adoptive pets life every now and then, to make the moment eternal and go through them years later to relive them.

They seem the best adoptive parents ever because they throw parties for they pets and even dress them up in little cute outfits.